PLANNING A JEWISH WEDDING – WHAT YOU NEED TO KNOW 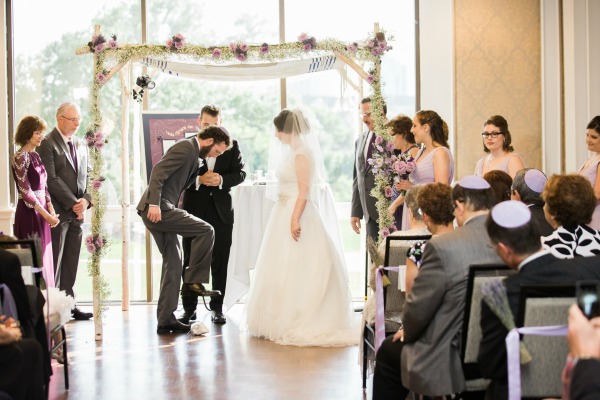 When planning a Jewish wedding, you may realize that besides the wedding details that all couples need to plan, Jewish couples need to consider several other important factors connected to their ceremony and reception. Depending on each of the Jewish denominations, level of religious observance and different Jewish cultures, there are so many different customs and rituals to incorporate in a Jewish wedding.

The first thing you want to do before you set the date is to contact the Rabbi that you would like to marry you and check their availability.

The second thing is to make sure before you book a venue that the date you have your heart set on is not one that you are not allowed to get married on according to the Jewish law.

Here are the most common Jewish wedding ceremony rituals:

The Ketubah- A Jewish marriage contract that traditionally outlines the groom’s responsibilities to his bride, the conditions he will provide in the marriage, the bride’s protections and right.

In Conservative and Reform weddings there is an egalitarian approach, which outlines the responsibilities of the bride and groom to each other. The Ketubah is signed by two witnesses before the ceremony begins, then is read by the Rabbi during the ceremony. 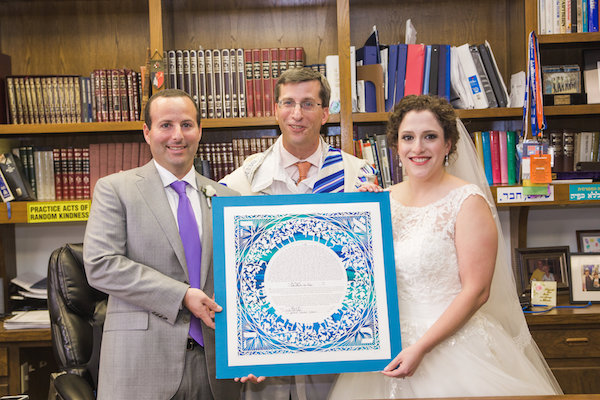 The Bedeken – Veiling of the bride – This beautiful custom of veiling the bride by the groom takes place after the Ketubah is signed. The groom accompanied by family and friends proceeds to the bride and places the veil over her face.  The ritual dates back to the Biblical story of Jacob who intended to marry Rachel, the woman he loved, but was tricked by his future father-in-law, Lavan, into marrying Rachel’s older sister, Leah. By veiling the bride, the groom ensures that he is marrying his bride and also that he sets her apart from all the others. 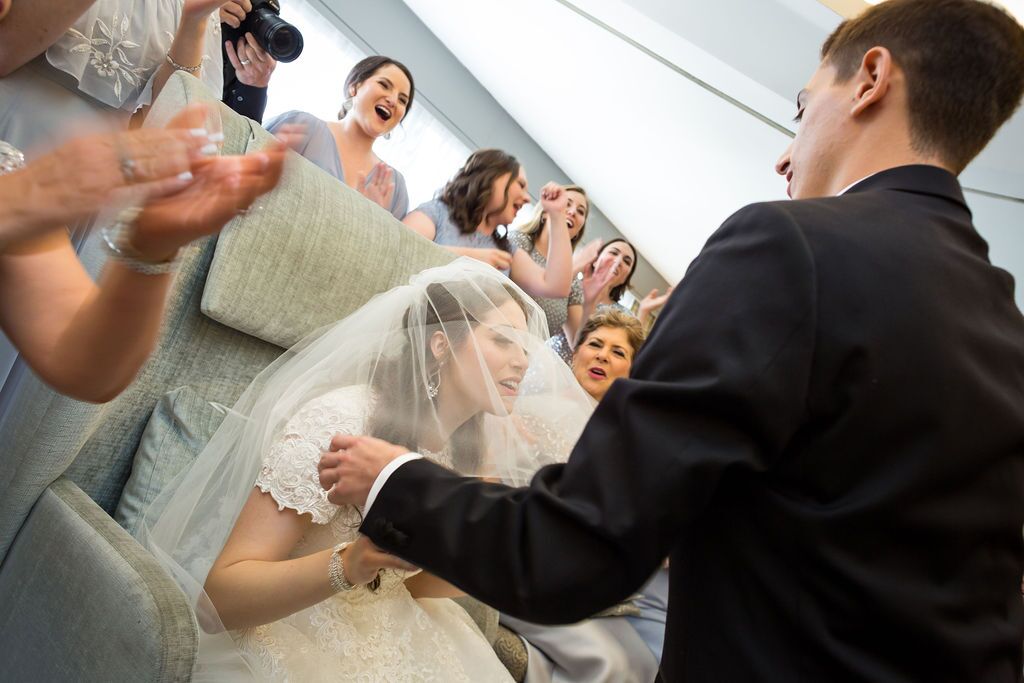 The Processional– The bride and groom are escorted by their parents, symbolizing that marriage is a union not solely of individuals, but also of families. In Orthodox weddings, both set of parents will carry candles while walking down the aisle. Traditionally, both set of parents stand under the Chuppah during the ceremony alongside the bride, groom and the Rabbi. 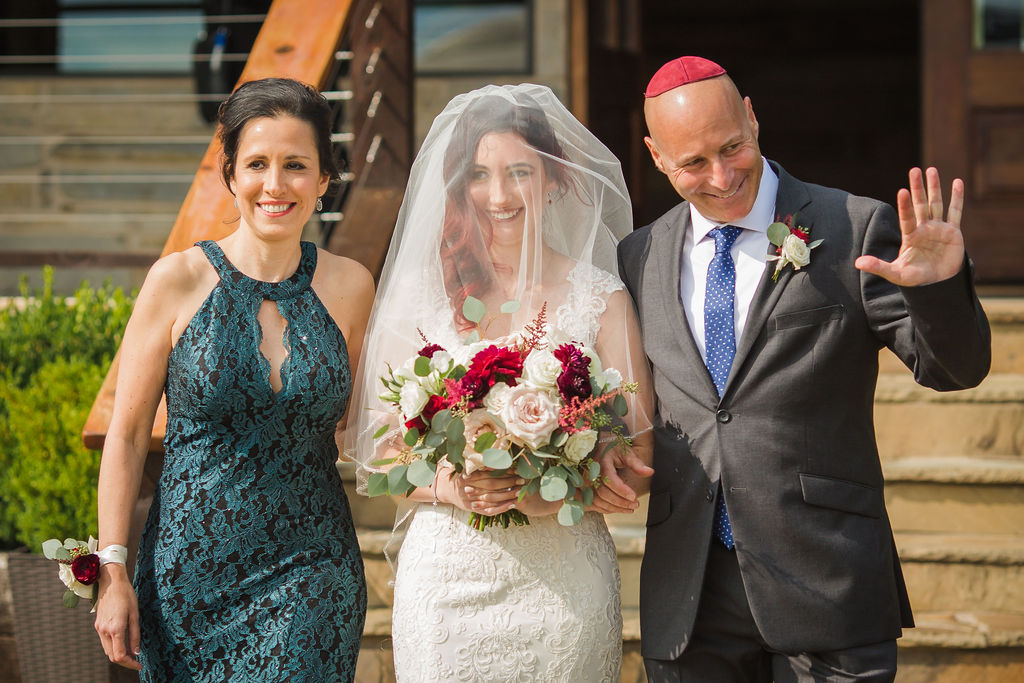 The Chuppah -The bride and groom are getting married under a chuppah, a four-cornered canopy held up by four poles.  The chuppah is a symbol of the home to be built and shared by the couple. It is open on all sides, just as in the biblical story, Abraham and Sarah had their tent open on all sides to welcome friends and relatives in unconditional hospitality.

The canopy is often made of a Talit, a prayer shawl belonging to a family member of the bride and groom. 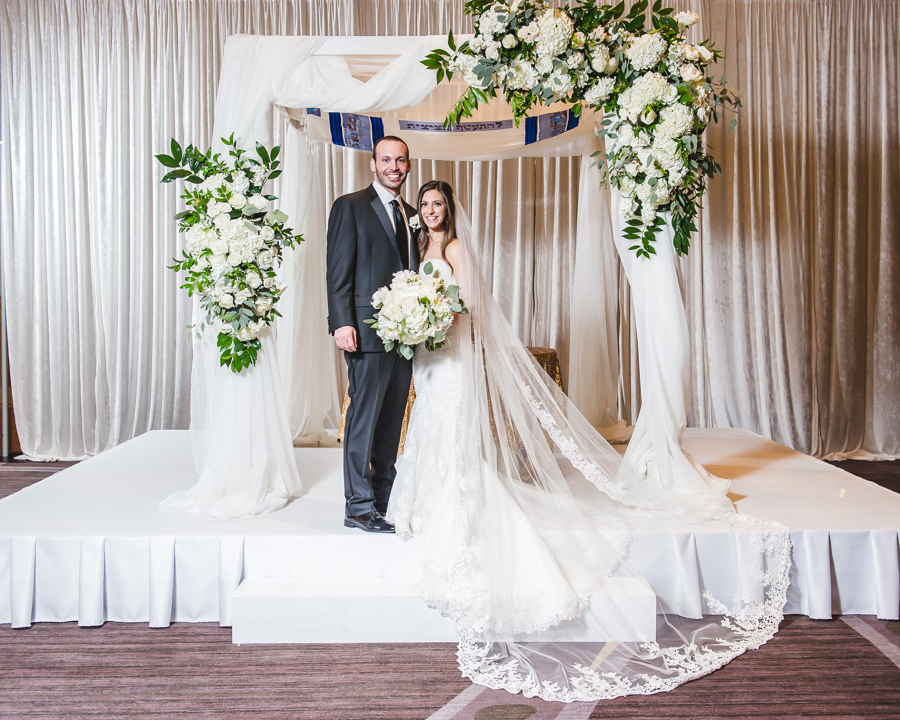 Circling- Before entering the chuppah, in the Ashkenazi tradition, the bride will circle the groom seven times, symbolically creating a new family circle. Just as the world was created in seven days, the bride is figuratively building the walls of the couple’s new home.

Kiddush– The ceremony consists of two parts, the Betrothal and the Marriage. After the Betrothal blessings, the groom and bride will drink from a cup of wine. Later in the ceremony, the couple will share a second cup of wine. Wine, a symbol of joy in Jewish tradition, is associated with the Kiddush, the sanctification prayer recited on Shabbat and festivals. Marriage, which is called Kiddushin, is the sanctification of a man and woman to each other.

The Ring Ceremony– In Judaism, the rings exchanged must be a single pure metal, solid without blemishes or ornamentations, symbolizing that the marriage will be one of simple unbroken beauty. The groom will place a ring on the bride’s index finger, stemming from the ancient belief that the index finger was directly connected to the heart.

The Seven Blessings– The Seven Blessings (Sheva B’rachot) comprise the heart of the wedding ceremony and are recited by the Rabbi over the second cup of wine. Some couples choose to honor 7 guests with reciting these 7 blessings. It sanctifies and celebrates the divine moment that is the wedding of two people. These Seven Blessings speak of creation of the world, the joy of children, Jerusalem, Love, Friendship and rejoicing with bride and groom.

Breaking of the Glass– The ceremony concludes with the groom breaking a glass with his right foot.  This symbolizes the remembrance of the destruction of the Temple of Jerusalem and also serves to remind us that even in the time of our greatest joy, we remember the suffering of our people. The breaking of the glass suggests the frailty of human relationships and the work that must go into a marriage so that it does not fall apart. Once the glass is broken, the guests will cheer MAZEL TOV, a well-known Jewish phrase that means good luck or congratulations.

The Yichud (seclusion)- Immediately following the ceremony, the bride and groom will be escorted to a private room to share the first few minutes of their marriage together, as husband and wife. It is a private sweet moment before joining family and friends.

We specialize in planning Jewish weddings within the Reform, Conservative and Orthodox branches, including supervised Kosher weddings. We can help you create a meaningful event that will reflect your personality and incorporate your families’ unique traditions. My team and I are ready to help you with the details of your Jewish wedding.

We would love to hear from you!

We offer a complimentary initial consultation in person – or by phone – so we can learn more about your specific needs and share with you our portfolio. After that meeting, we will be happy to provide you with a customized proposal.