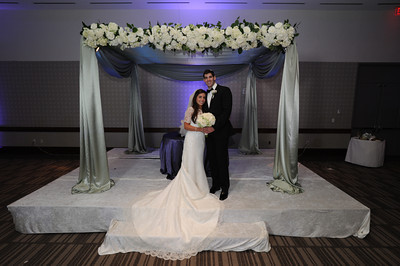 Some Jewish weddings planned by Ruth Spirer of Weddings and Events by Ruth are very religious and some are reformed.  Most are somewhere in the middle.  The Sacks/Solomon union was an orthodox Jewish wedding that represented many unique Jewish religious rituals.

Unlike most Protestant weddings, Jewish weddings are held on Sunday or after the end of the Sabbath on Saturday.  Talia Sacks and Jethro Solomon of Washington, D.C. were married at the Westin Galleria Hotel in Dallas, Texas on Sunday, June 17, 2012.

An hour before the ceremony, Kabbalas Panim (pre-ceremony receptions) took place in two separate rooms, one for Talia and one for Jethro.

Jethro enjoyed stories, cocktails, and singing while surrounded by his male friends, family, and the Rabbis.  The Ketubah, the Jewish marriage contract, was also signed. It details all the obligations the groom has for his bride for the rest of their lives.  The groom must provide for his new wife and take care of all of her needs.   Reformed Jewish couples have taken on the contract giving obligations and commitments to both the bride and groom.  Following the Orthodox tradition, Jethro was the only one to sign the Ketubah.

As Talia’s female friends and family walked to greet the bride, they were able to read the story of Talia and Jethro’s courtship on the heart-shaped footsteps on the path leading to her.  Talia was given congratulations and she gave to all her holy blessing.

Talia’s sister drew a tree and asked that each guest put their finger in ink, stamp a fingerprint leaf on a branch, and write a special message to the bride and groom.

Once the Ketubah was signed at the Groom’s Tish, the mothers of the bride and groom broke a plate signifying that just as the breaking of the plate is irreversible, so too should the engagement be irreversible.

Before the Chuppah ceremony, Jethro was escorted by his father and his soon to be father-in-law, friends, and relatives to the Badeken, the veiling of the bride.  Two stories in the bible bring about this ritual.

The first story is of Rivkah’s covering her face with her veil before her marriage to Isaac.  The veil over her face signified she was saving herself for her groom.  Since then, the veiling impresses upon the bride her duty to live up to Jewish ideals of modesty.  The second story is based on the Biblical story of Jacob, Rachel and Leah.  Jacob intended to marry Rachel but her father tricked him and put a veil over his other daughter Leah’s face.  Jacob did not confirm the identity of the woman behind the veil and married the wrong sister.  Jacob had to work for 7 years before being given the right to marry Rachel.  Now the Badeken takes place so the groom can make sure he is marrying the one that holds his heart.

After the Badeken, the ceremony began.

Talia and Jethro were each escorted down the aisle by both their parents carrying a lit candle that was blown out once under the Chuppah, the wedding canopy.  The Chuppah signifies the first roof Talia and Jethro would share.  The absence of walls on the canopy represent an open invitation for guests in their home. Jethro wore a kittel, a white robe worn by Jewish men on special occasions.

When Talia came to Jethro under the Chuppah, she circled him seven times.  Seven is significant because of a number of reasons.  First, seven is the number of days in which the Earth was created and so the bride and groom are creating a new life together.  “When a man takes a wife” is a phrase found in the Bible seven times.  Finally, this ritual comes from the story that tells us the walls of Jericho fell after Joshua circled them seven times.  After the bride walks around the groom seven times, the walls between them fall and they become one.  When Talia finished encircling her groom, she stood at his right facing the guests.  The guests were seated separately, women on the left and men on the right, as the bride and groom were standing under the Chuppah.

Once the ceremony was over, Jethro stepped on a glass in remembrance of the destruction of the holy temple in Jerusalem.  While the music played, the bride and groom were danced out for the Yichud, the time of seclusion.  As newlyweds, they broke their fast.  Traditionally this few minutes shared together allude to their new intimate relationship and emphasizes that their absolute privacy be respected.  Interestingly enough, this time of seclusion has become a trend among non-Jewish weddings.

As requested by Jethro and Talia’s parents, the American and Israeli national anthems were both played before the meal.  Cards noting assigned seats on each table inscribed the word “love” translated into 26 different languages.

Invitations by Debbie Cohn with Letter Art were mailed with an RSVP card that included a unique question for the guest, “What song will most likely get you on the dance floor?”  The answers were collected and the band was given the list of songs before the reception.

When the dancing began, men danced on one side of a partition while women danced on the other.  After about forty-five minutes of traditional Horah (Jewish circle dancing with the bride and groom being lifted on chairs), the partition was removed and men and women were encouraged to dance among each other. With a song request list in hand, the band Limelight by Emerald City really got the crowd going.  There was not one still body in the room.

Ruth accommodated planning with wedding party in Atlanta, Dallas, and Washington D.C.  As she loves to do and is known for, Ruth made the Sacks/Solomon wedding truly reflect the personalities of the bride and groom.

After 8 months of planning this wedding from A to Z, Weddings and Events by Ruth has nothing but fond memories of the days leading up to the wedding and the day of celebration.

Weddings and Events by Ruth chose the following respected vendors to make the Solomon wedding the best it could be: